The global birthrate continues it's ongoing descent. In some countries there has been a dramatic drop due to covid, such as in the Philippines whose annual births in 2019 were 1.5 million, and which dropped to 900,000 and 400,000 in 2020 and 2021, respectively.

In 2021 the birthrate of Thailand dipped below the deathrate. Significant declines in birthrate precipitated since the 2012 coup, declining every year since 2013. The years 2018 and 2019 had a similar decline to that of 2020 and 2021, ~5% and ~7% for each set of years. Thailand soon will be or is now at peak population of just over 70 million. It is expected to decline to 45 million by 2100. Indeed, the birthrate dropped below the deathrate in 2021. China has dropped to 0.73 births per female, as people declare themselves to be the last generation, a meme that the Chinese government is intent on suppressing. The birthrate declined by nearly 30% from 2020-2021. China now has the lowest birthrate since 1949. If this continues, even with an increase in life expectancy, China will halve its population from 1.4bn to 730m by 2100. It is expected to reach peak population from 1.45bn to 1.55bn in 2030, though the decline may accelerate due to the trends of the last two years. There are certain reports that due to the dramatic reduction in the birthrate, China may reach peak population this year.

In the UK, trends continued with only a temporary impact from lockdowns.

Russia continues its downward trend and there is speculation that the war in Ukraine and the resulting economic backlash will have a very negative effect on the birthrate.

India is now at a replacement level birthrate, announced in late 2021. It is expected to go from 1.4bn up to 1.7bn and down to 1.5bn by 2100. India will eclipse China as the most populous country quite soon. Even with India's own birthrate reduction, the Chinese birthrate is collapsing even faster.

In the United States there is ongoing birthrate decline, however immigration increases overall population growth to around a half percent per year, even with the impact from Covid, which was significant. 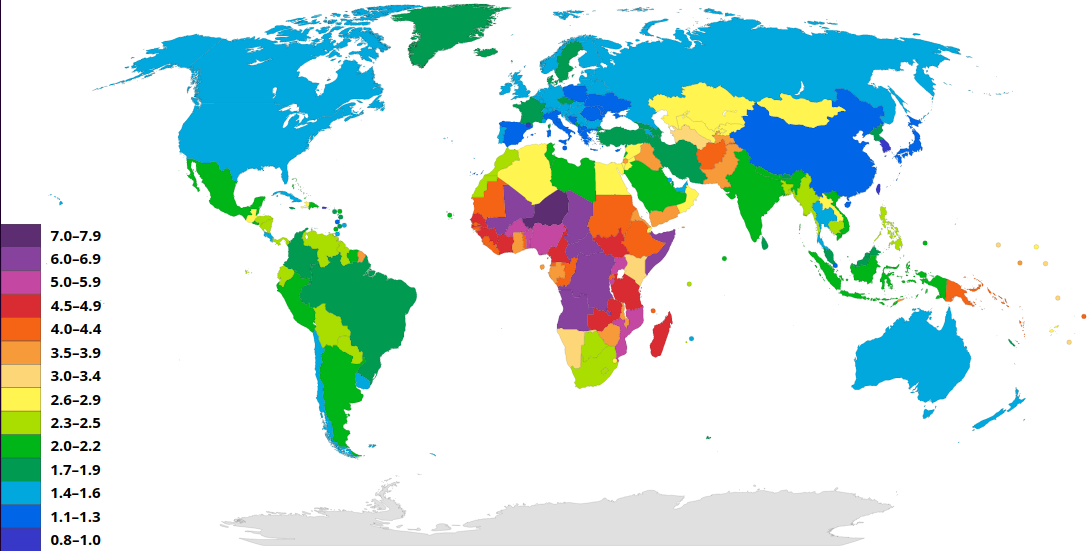